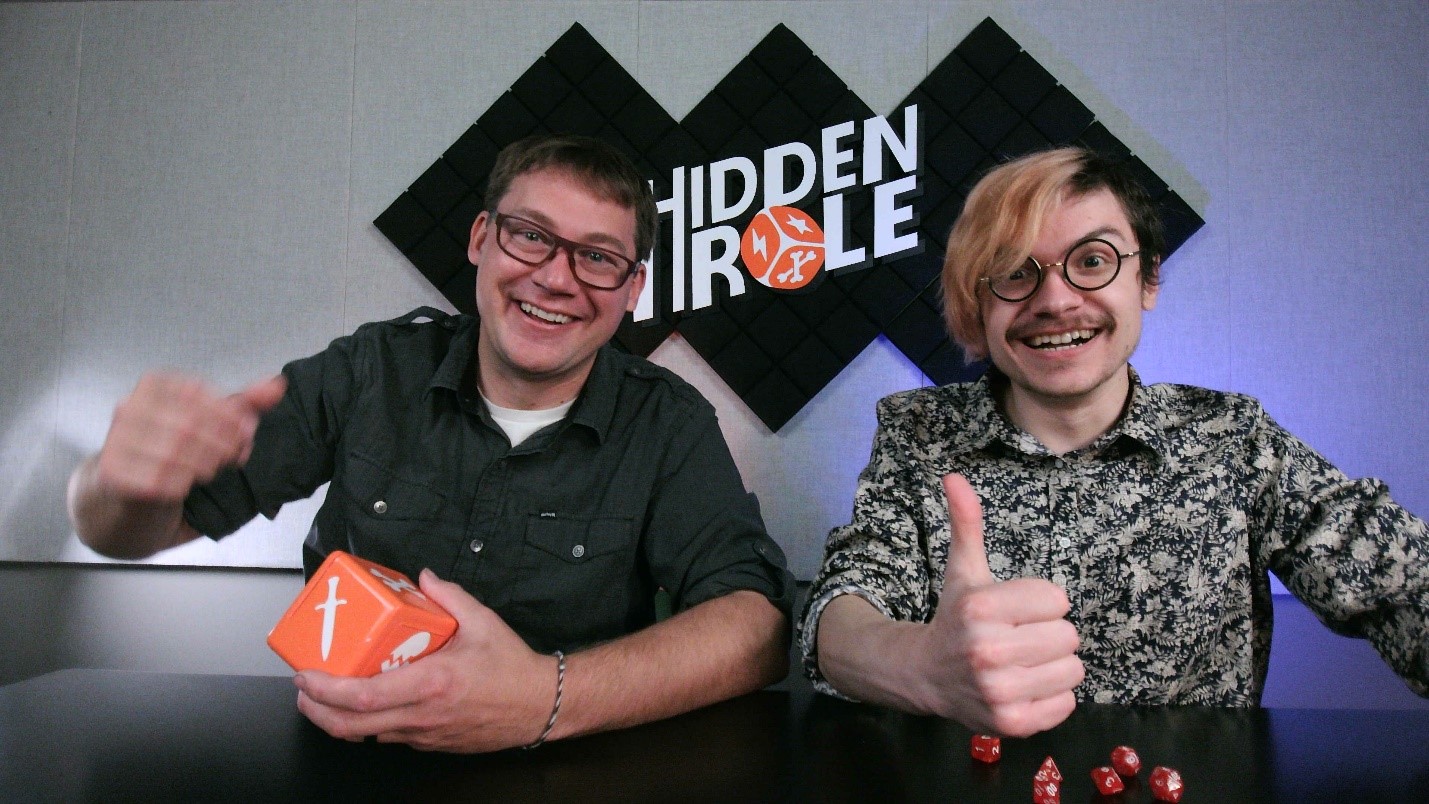 In 2020, a meeting of the minds brought David Yakos and Branson Faustini to the same conclusion; they were going to make a podcast. David was 2-time Toy-Inventor-of-the-Year and a lifelong inventor with connections across the industry of play, and Branson was a game designer and media engineer who had dipped his toes into filmmaking.

David and Branson have been developing that podcast for three months. In Hidden Role: The Brains Behind Your Favorite Games, they interview the unsung creators behind toys, games, and all things play. Many podcasts dive into rules and reviews, but Hidden Role wanted the world to hear the struggles and victories that make up these 10-year-long overnight successes. 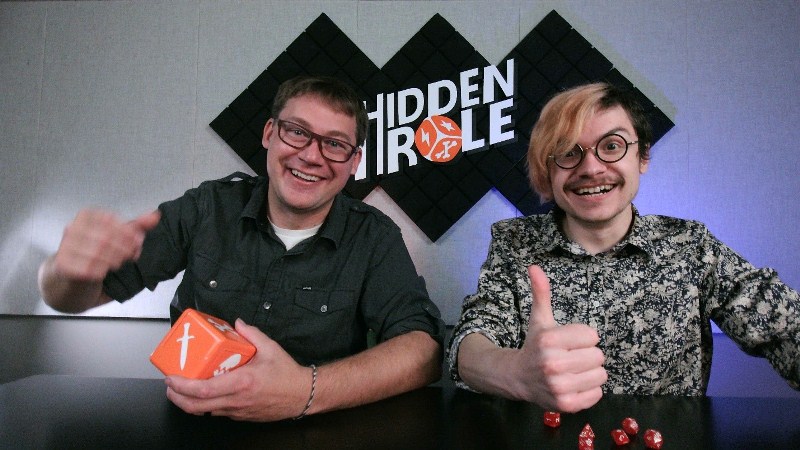 "It's not about getting only the most famous or most prestigious people." David said. "We’ve been lucky to hear the stories behind the invention of Nerf & Twister, Bop It, Jenga, Thinking Putty, and from a good handful of industry professionals and inventors, but really, our only qualifier is that the guests have made something to do with play, and that they have a great story to tell. On Hidden Role, everyone's on the same level. You're all heroes to us.”

Branson elaborated. "The industry is so big, it's so saturated. There's so much amazing history, most of it goes unreported. We're trying to highlight the stories that nobody has heard. Our next big goal is to break out of our immediate echo chamber – we're white dudes in Montana, very isolated from the rest of the world, so we're actively seeking creators and inventors from every background.  Hidden Role is about the universal story of the creative journey. We want inclusivity and for everyone to feel welcome – to show that everyone can be successful and follow their dreams."

David pulled out his phone and scrolled down a long list of names. "We have a wish list that's more than a hundred people long, and so many people have already reached out to us before the show was even announced. It's been so heartwarming to know that people care about this. People want to share and hear these stories."

He went on to say, “We are looking for more guests! Anyone out there that has a story to tell, knows someone with a story, or just wants us to hunt down the inventor responsible for their favorite toy or game, please let us know on our website!”

When asked about their favorite moments so far, they had vastly different answers.

David laughed. "It's not out yet, but we recorded this episode with Aaron Muderick from Crazy Aaron's Thinking Putty. He talks about the bumps in the road when you're starting your own business, and oh my gosh, he tells this story about how a hospital gift shop mailed him a box of human blood! I can't do it justice… you’ll have to listen to it from Aaron himself."

Branson looked thoughtful. "Matthew Lillard was so fun! His episode ends with an on-the-spot improv story, and we had a such blast. But he also gave some advice that really spoke to me about taking a chance on your dreams. I was thinking about it for weeks. I'm still thinking about it [he laughs]." 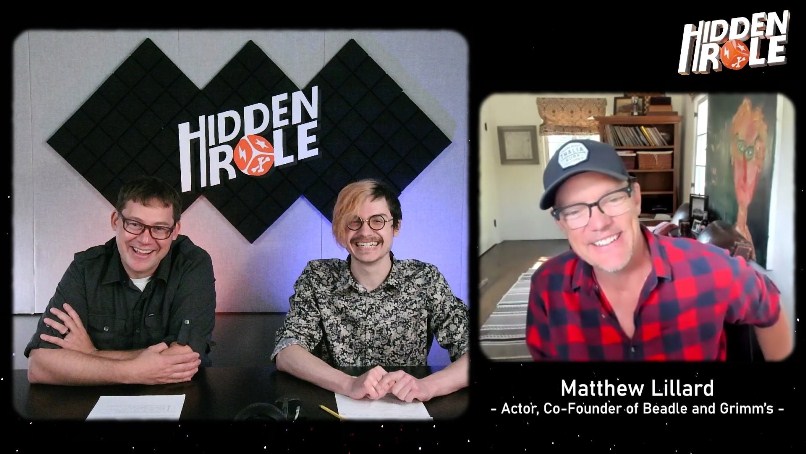 The Leadup to Launch

"I think it's a super neat time for us to do this," Branson explained. "I feel like we're entering at a perfect time. We've got this great place in the industry, a sort of untapped goldmine [of stories]. We want to grow our audience, but there's no pressure from investors – if that makes sense – we're doing this just because we want to. We can take the time to grow it and make it really, really good."

David agreed. "Really, the biggest support we ask for is help in promoting our creative industry. Hit that subscribe button, leave a review! Share us! And listen to the amazing people we are fortunate to interview!"

But like most unique ideas, it had a different start.

“It’s already feeling official,” David said, showing us photos of his studio, a cozy grey room with lights, sound panels, cameras, and a mounted logo. "We had built [the studio] because we wanted to have a better place to shoot [videos]. We're inventors, we send out a lot of pitches. We needed a better spot than my office." 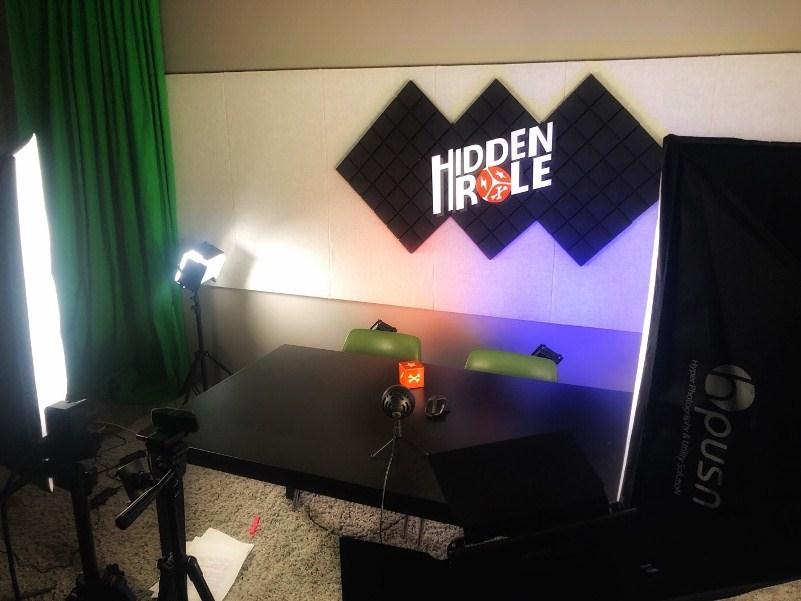 He shared a photo of his office, an orange room with full-wall mural of Einstein. "He had a wild mind. What was going on in there? [Laughter].” 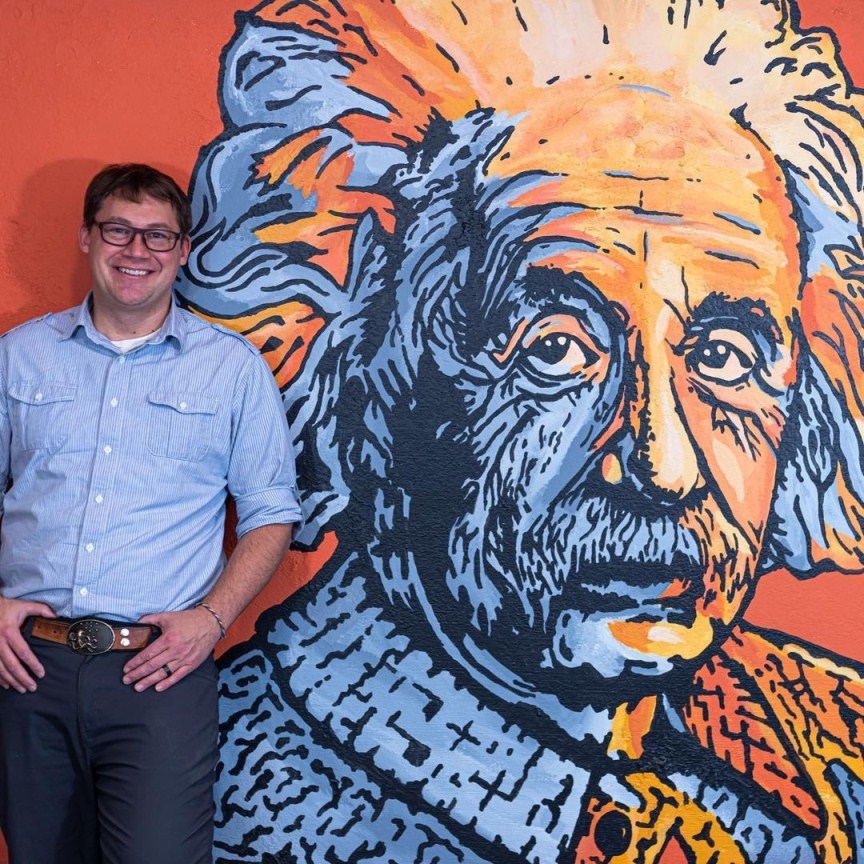 “Then we realized we could do way cooler things with it. We’re total nerds. Our first thought was to play Dungeons & Dragons down there. Then Branson explained how we could make a media setup with the power to livestream and record way longer content – we started talking about what kinds of videos we had always thought about making."

"We had both wanted to make our own podcast for a long time," Branson explained. "For about a year I had been on a podcast with a few friends, so I knew a little bit about the actual recording process. But I'd never gone really deep into publishing, hosting, promoting – the stuff you actually need to know to get it done. Talking with your friends is way different than hosting an interview."

According to David, they knew they didn't want to throw another voice into the sea of review and actual-play podcasts. "The tone of the show was very important to us. We didn't know how serious it was going to be. Were we going to have a sort of a casual conversation, or was it going to be very scripted – like an NPR segment.

We're very lighthearted. We're goofs, that's part of our authenticity. We leaned into our strengths. That's part of the toy and games industry, too. People of Play facilitates the kind of environment where, after a long day of pitching, you sit down and play some games and have some laughs with your peers. It's great."

He held up a printed list of questions with handwritten notes scrawled across it. "We wanted to bring that authenticity to the podcast, so it lies somewhere in the middle [between conversation and scripted]. We have a list of questions, but we just let the guests talk and see where it goes. It's not about us, we really try to shut up most of the time."

As David admits, "I have so many toys [on my shelf] that were made by someone I actually know, and I've heard so many crazy stories that no one has ever heard. When you listen to the creators themselves, you're invited into their minds.... You might find you have a lot more in common with them than you thought. It's encouraging and learn that behind most big successes there was a human being with relatable struggles, even if you're not an inventor."

Branson agreed. "Everything we've heard so far has been very universal. Creatives in every field will learn something cool."

Interested in invention, creative process, and some behind the scenes stories?

NEW! Hidden Role Podcast, The Brains Behind Your Favori

tBR Person of the Week: Ahren Hoffman Just Zipping Along 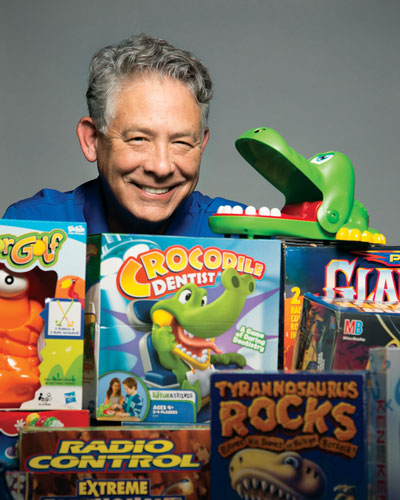 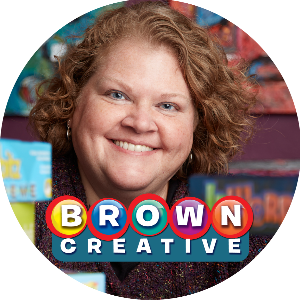 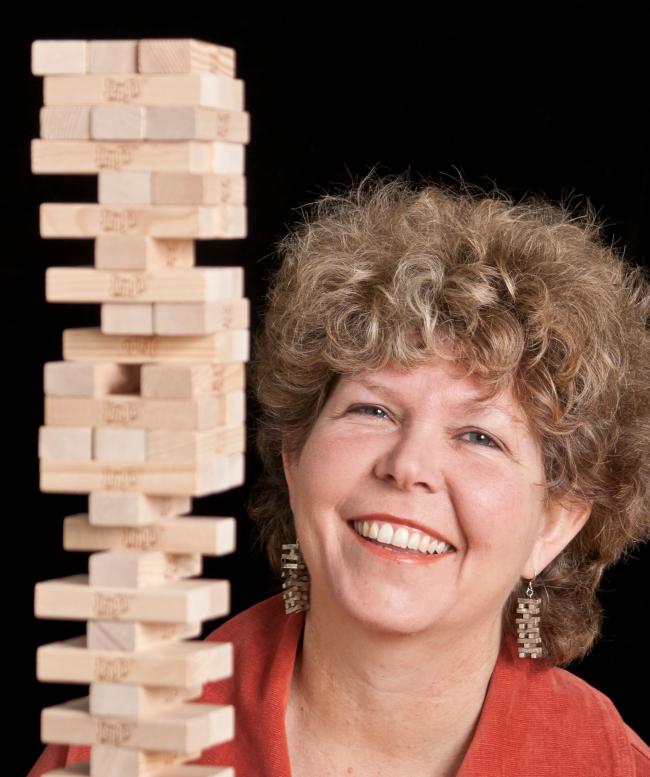 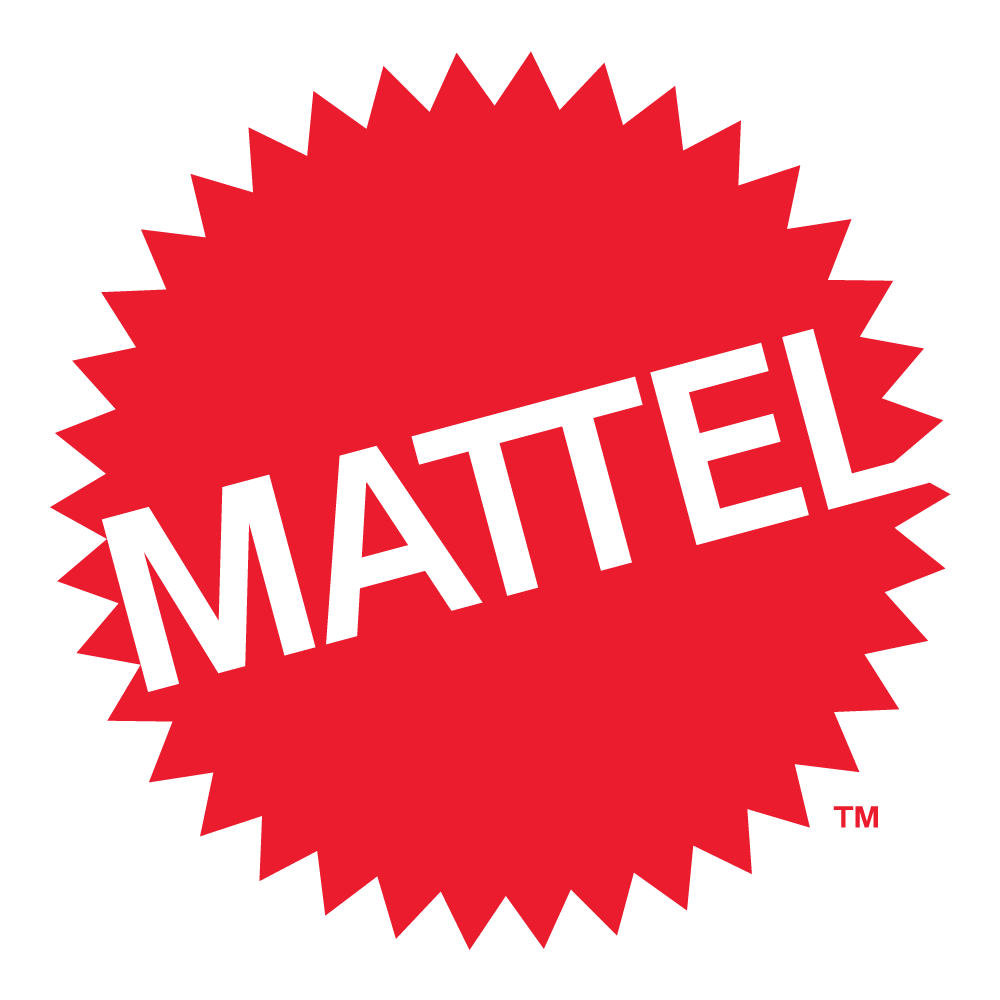 The worldwide leader in the design, manufacture and marketin.... 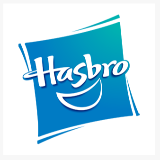 American-Canadian multinational conglomerate with toy, board.... 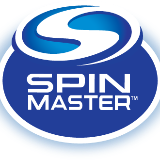 Spin Master’s Mission and Vision are derived from our DNA,.... 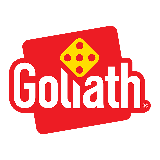 As one of the few remaining family-owned toy companies, Goli.... 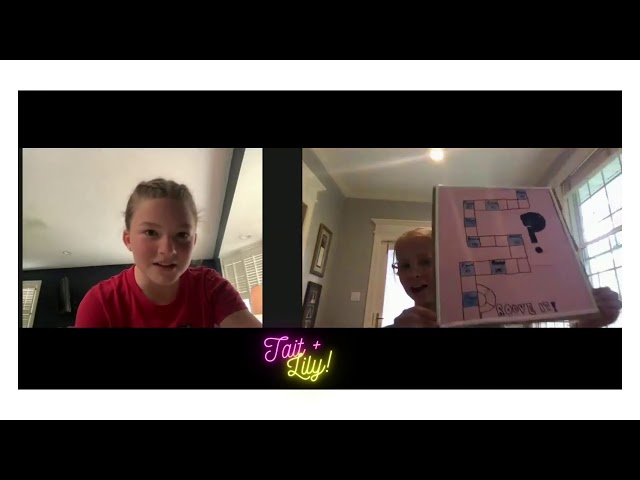 Keep Trying and Don't be Afraid to Make Mistakes